Energy In and Energy Out 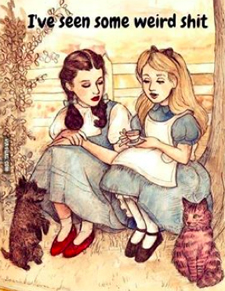 Much of the weight-loss and maintenance information available to us is both inaccurate and unhelpful. Like Dorothy of Oz and Alice of Wonderland, during my lifetime of research on those issues, I've seen some "weird shit".

Here in my DietHobby online scrapbook I work to sort out and save reasonably accurate information that might prove helpful to me and perhaps to others.

The article below deals with the issue of Energy In and Energy Out, which is not as simple as most people believe.

A snapshot of the unaveraged data contained in scientific research of Individual BMR or RMR (metabolism rates) bears a strong resemblance to a blood spatter pattern at a violent crime scene. Metabolism rates are all over the place, but these widely varying numbers are then averaged out to create the calculations we see formulas like Harris-Benedict, Mifflin, etc.  An Average is a Statistical number for mathematical convenience. It is not an accurate number for Everyone, and sometimes is not even accurate for Anyone ... similar to the following joke:

In general, this basic fact of human nature is overlooked, or ignored.

Here is a recent article by obesity specialist, Dr. Sharma addressing this problem. 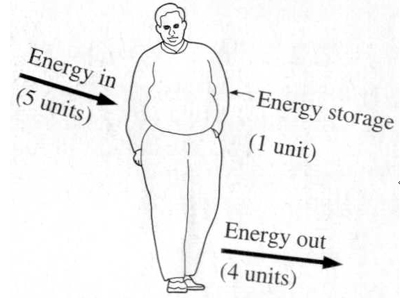 As some of us may recall from basic biology, the very definition of “life”, which tends to move from a state of lesser organization to a state of higher organization, is that it appears to defy the second law of thermodynamics (this is often referred to as “Schroedinger’s Paradox”).

In actual fact, we can easily argue that the second law does not apply to living organisms at all because living organisms are not closed systems and life’s complex processes continuously feed on its interactions with the environment.

Yet, when we consider the first law of thermodynamics and how it applies to obesity, we seem to forget the fact that we are again dealing with a complex living organism.

Thus, in what has been referred to as the “Folk Theory of Obesity”, we simply consider weight to be a variable that is entirely dependent on the difference between energy input and energy output (or “calories in” and “calories out”). And in our arithmetical thinking, we consider “energy in” and “energy out” as simple “modifiable” or “independent” variables, which if we can change, will result in any desired body weight.

In fact, our entire “eat-less-move-more” approach to obesity is based on this concept – the central idea being, that if I can effectively move “energy in” and “energy out” in the desired directions, I can achieve whatever weight I want.

This notion is fundamentally flawed, for one simple reason: it assumes that weight is the “dependent” variable in this equation.

However, as pointed out in a delightful essay by Shamil Chandaria in my new book "Controversies in Obesity", there is absolutely no reason to assume that weight is indeed the “dependent” or “passive” player in this equation.

Indeed, everything we know about human physiology points to the fact that it is as much (if not more) body weight itself that determines energy intake and output as vice versa.

Generally speaking, heavier people tend to eat more because they have a stronger drive to eat and/or need more calories to function – in other words, body weight itself may very much determine energy intake and output (and not just the other way around).

Similarly, losing weight tends to increase hunger and reduce energy expenditure – or in other words, changes in body weight can very much determine changes in energy intake and expenditure (and not just the other way around).

Once we at least accept that this equation is a two-way street, rather strongly biased towards body weight (or rather “preservation of body weight”) as the key determinant of “energy in” and “energy out”, we need to ask a whole different set of questions to find solutions to the problem.

No longer do we restrict our focus to the exogenous factors that determine “calories in” or “calories out” (e.g. our food or build environments) or see these as the primary targets for decreasing caloric intake or increasing caloric output.

Rather we shift our focus to the physiological (and psychological) factors (often dependent on our body weights) that ultimately dictate how much we “choose” to eat or expend in physical activity.

Chandaria’s essay goes on to discuss the many “derangements” of physiology that we know exist in obese individuals (and probably already exist in those at risk for obesity), including leptin resistance, impaired secretion of incretins like GLP-1, insulin resistance, alterations in the hypothalamic-pituitary-adrenal (HPA axis), and sympathetic activity. (Any keen student of human physiology or psychology should have no problem further extending this list.)

In Chandaria’s view, it is these physiological (and psychological) processes that ultimately determine whether or not someone is prone to weight gain or ultimately gains weight.

In fact, the only factor that determines why two individuals living in the same (obesogenic) environment will differ in body weights (even when every known social determinant of health is exactly equal), is because of their individual physiologies (and psychologies) which ultimately determine their very own individual levels of “energy in” and “energy out” (and how their bodies respond to it).

Readers may be well aware that in tightly controlled feeding studies, the same absolute amount of extra calories can result in very different amounts of weight gain.

Ignoring this basic fact of human nature distracts or, at the very least, severely limits us from finding effective solutions to the problem.

This “physiological” view of the first law of thermodynamics should lead us away from simply focusing on the supposedly “exogenous” variables (“energy-in” and “energy-out”) but rather draw our attention to better understanding and addressing the biological (and psychological) factors that promote weight gain.

This would substantially change the aims and goals of our recommendations.

Thus, for e.g., rather than aiming exercise recommendations primarily at burning more calories, these should perhaps be better aimed at improving insulin sensitivity and combating stress. Thus, rather than counting how many calories were burnt on the treadmill, the focus should be on what that dose of exercise actually did to lower my insulin or stress levels.

Indeed, we may discover that there is a rather poor relationship between the amount of calories burnt with exercise and the physiological or psychological goal we are trying to achieve. While more exercise may well help burn more calories (which I can eat back in a bite or two), it may do little to further improve insulin resistance or combat stress thus leaving my weight exactly where it is.

Similarly, rather than trying to restrict caloric intake, dietary recommendations would be based on how they affect human physiology (e.g. gut hormones, reward circuitry or even gut bugs) or mood (e.g. dopamine or serotonin levels).

Given that our past efforts primarily focusing on the “energy in” and “energy out” part of the equation have led nowhere, it is perhaps time to focus our attention and efforts elsewhere.

Or, as I often say in my talks, “We’re not talking physics here – we're talking physiology – that’s biology messing with physics”.

Shamil A. Chandaria: The Emerging Paradigm Shift in Understanding the Causes of Obesity. In Controversies in Obesity.  Eds: Haslam DW, Sharma AM, Le Roux CW. Springer 201