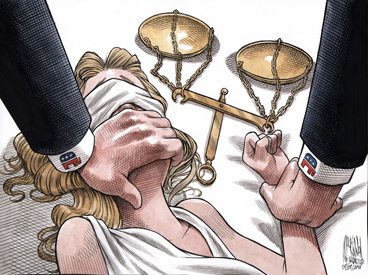 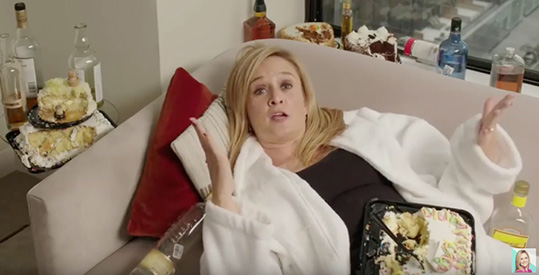 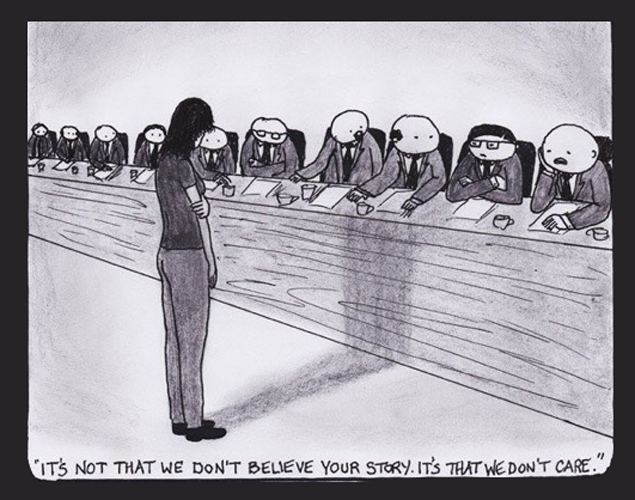 The Obviousness of Brett Kavanaugh
by flynfinch - Sept 28, 2018

How subtly our world can distort what we are witness to.   What is so very obvious.

How it can make us think WE are the vandals of character for noting the overt harshness in others.  That WE are somehow misaligned in our compassion for calling out entitled self-indulgence.  That WE are somehow rude for bearing witness to incivility.
WE, who just happen to see a thing illuminated for what it is.

I then watched the news.

I heard them call it a draw.
I saw republicans exhale.
"He said. She said."  "They were both believable."   "Equally credibly."
"Each told their own truth."

Wait, what!? huh? Did YouTube live-stream an Oliver Stone adaptation of the hearing  with an alternate ending?

What did everyone else see?

I went to bed a bit dazed, fighting back the apathy that inevitability brings.  Because of the drain of the hearing, yes.  But also because I felt like I was living in some universe that had forgotten the laws it was supposed to operate under. As if gravity had loosened its hold a bit and we were slightly less tethered to the ground below us.

I then woke up thinking... THIS. IS. BULLSHIT.

And I re-watched Kavanaugh's testimony

I sat awed at the level of hostility and bluster that huffed out of him in all directions.   His willingness to push his anger OUTWARD to anyone in the frame of his pressured stare.

And in the dullest, smallest sort of way.  Like an angry 13 year old that lacks creativity and a good vocabulary.   Not a smart-ass.  Just an ass.

It was something I had seen before.  Many times before.  When prideful men get mad at the truth.  When they lie in the most outrageous sort of way that defies your own senses.  That momentarily baffles you into questioning yourself.

Everything is turned external.  All of the mess, all of the problem, all of the consequence, it is the fault of The Other.  Need not worry what precisely The Other is ... pointless really ... just note it exists, and it is capitalized as a proper noun.

He is a martyr, and a very very loud martyr.  Falling on the sword of ... ???  I am still not entirely too sure what sword he thought he was falling on.

Oh! Yes.  His sacrifice was to the narrative of self-determination. The self aggrandizing meritocratic fiction that enables men to imagine that going to Yale law and playing basketball is somehow an alibi for attempted rape.

I keep hearing that Kavanaugh took a page out of the "trump playbook.” But let's be clear here. THERE IS NO PLAYBOOK.  This is not a strategy.   This is not a tactic.  This is HIM.  This is THEM.  This is the core and obvious element of who they are.  This outlandish sense of entitlement that enables them to uniformly dismiss an unfavorable consequence of a reality of their own making.

That behavior, no matter what society may incline you to assume, is not simply "how men express themselves."   It is not the self-aware tapping of a well of unwieldy but sincere male emotion.

No. IT IS ALL SURFACE.  It is doing everything in his  power to refuse to look inwards.  To refuse to acknowledge.  It is the reaction of a narcissist.

Which is ever the more notable when placed alongside the behavior of someone wishing nothing more than to better get to the truth.

Dr. Ford did not scream at partisan Republicans for not calling for a more thorough investigation. For not requiring the other primary witness to appear.  For not even having the balls to ask her questions directly.

Dr. Ford did not yell at the dregs of our society that would spew such hateful venom to cause her to hire personal guards and move homes.

And Dr. Ford never once even rose her voice to express particular hatred against the man she is positive assaulted her.

Instead, she FELT.  You could see her feeling - as her thoughts  came into contact to that unsolicited experience deeply fixed within her.  She did not rage on the outside because she understood the THING most real and haunting was on the inside.  It was a part of her.  Her words were not daggers to some external threat.  Because she knows, LIVES, the reality that the threat has already been executed.  And that she must confront it everyday.  On her own.  In her own quietness.

Kavanaugh wielded the words of righteous scorn.  Of indignant rage.  Of provocation.  He was not a man tightly and humbly drawn inward, looking for answers, wanting truth.  He was a man habitually driven to confuse the world (and perhaps himself) by confronting everything and everyone except for inconvenient reality of who he may be.

The sort of confrontation with reality that Dr. Ford has been reliving since she was 15.

Do not let the world convince you Kavanaugh's behavior is HONEST.  Or PURE.  Or COMPELLING.   Because the world too sometimes lies to your face.

No.  That sort of behavior is EVASIVE. And DEFLECTING. And ENTITLED.  And mostly, OBVIOUS.

It is true that we cannot precisely know for certain who is telling the truth.

But it takes no comprehensive analysis to decipher between SHE who sought the truth and HE who had the luxury of remaining indifferent to it.

We all saw it.  Illuminated.

I join those who are feeling a need to Rant while Eating Cake.
See video below