Here is my Halloween treat  to you.

Okay, maybe it was a trick.☺

This morning I watched an inspiring video
that reflects my own beliefs and experience in life.
These truths are relevant for our efforts towards
weight-loss and maintenance of that weight-loss
as well as for all of the other areas of our lives.
So, I'm sharing it here with you.

The  video below, "Positive Thought Power", is also located
in DietHobby under RESOURCES, Videos, Interviews.

For those who are following my “Ask Grandma” videos
click to see my latest one: “How To Attract A Boy"
which is located in DietHobby under RESOURCES, Videos, Ask Grandma.

About six years ago, I reached my goal weight,
and now for all of that six years, I’ve been working
to maintain my body at that normal weight.

Here in the DietHobby Archives you can find many articles
that talk about how I do this, my own experiences and viewpoint.
The recent LA Times article quoted below
confirms that my own individual experiences are generally true.
I can personally testify that this hunger persists…even after 6 years.

"Dieters face a long battle with hunger.
Study finds weight loss triggers hormones that tell you to eat,
making it clear why it is so difficult to keep those lost pounds off.

As if people needed a reminder that losing weight is hard
and maintaining weight loss is even harder,
a study has found that for at least a year,
subjects who shed weight on a low-calorie diet
were hungrier than when they started and had
higher levels of hormones that tell the body to eat more,
conserve energy and store away fuel as fat.

The report, published Wednesday in the
New England Journal of Medicine, helps explain
why roughly 80 percent of dieters regain lost pounds
within a year or two of losing them -- and, sometimes, regain more.

After weight loss, "multiple compensatory mechanisms" spring to life,
the study shows, and work together to ensure that weight loss
is reversed quickly and efficiently.

The researchers, led by Joseph Proietto of the University of Melbourne's
Department of Medicine, write that
more than one solution to obesity will likely be necessary:
"a combination of medications" that will have to be safe for long-term use.

Two-thirds of Americans and a growing proportion of the developing world's population
are overweight or obese, and though obesity rates in the United States have begun
to stabilize, there's been no significant decline.

The Australian study paints a "very comprehensive" and "really discouraging" picture
of the breadth of the body's response to weight loss, said Dr. Daniel Bessesen,
an endocrinologist and obesity researcher at University of Colorado's
Denver Health Medical Center.
It captures just how many resources the body musters to ensure that weight is restored
-- a long list of hormones that regulate appetite, feelings of fullness after eating
and how calories are used.

The study enrolled 50 obese men and women without major health problems
and put them on a strict low-calorie diet for eight weeks. Within two weeks
after that diet, and again a year later, researchers measured subjects' blood levels
of nine distinct hormones that affect appetite and metabolism, and asked subjects
about feelings of hunger after meals, between meals and as mealtimes approached.

The challenges quickly became evident.
Thirty-four of 50 enrolled subjects made it to the one-year mark.
Four withdrew during the eight-week period of dieting
-- a rigorous 550-calorie per day regimen.
Seven failed to lose 10 percent of their body mass,
which had been set as a condition of continued participation.
And five withdrew during the yearlong "weight maintenance" phase,
when subjects got regular counseling on a diet-and-exercise plan
to stay at the new weight.

Of those who remained,
the average weight loss at 10 weeks,
when hormone levels were first measured, was just short of 30 pounds.

One year out, those subjects had gained back
an average of just more than 12 pounds.
But after and between meals, their appetites
-- and the hormones that influence hunger -- rebounded even more robustly.

The hormones -- including leptin, ghrelin, amylin, cholescystokinin and insulin --
vary widely. Some are secreted from the gut,
others by the pancreas or fat cells themselves.
Some increase appetite, some tell the brain that enough food has been eaten
and others help regulate how calories are used.

And for the dieters,
those hormones were sending a single message a year later:
".Eat more".
The subjects said they were just as hungry
as they had been upon completion of their crash diets
and significantly hungrier than they had been before their diets had begun.

"The high rate of relapse after dieting is not surprising," the authors concluded".

Just checking in to say Hello to everyone. This morning the scale said 116.8 lbs.  This is the lowest weight I've been since April, and I'm very pleased about it.  Especially since my calorie count has been about the same, ...which of course is really very low... and I haven't been exercising.

The only thing I'm doing different right now is my zero wheat experiment.  I've having some veggies and fruit, and even had some potato chips, so my carbs aren't super-low, ...that is...not super-low when we consider my calorie count totals.

It looks like this house repair, construction guy intrusion, is going to go on for a couple more weeks. My little repair job is the kind that the construction company schedules in between other bigger jobs, so it's hit and miss, here and there, which I find difficult.

I've become obsessed with getting that organizational detail done, and hopefully after a couple of more days,  I'll have accomplished it.

I'm also spending a lot of time as the YouTube Grandma answering the comments and questions of people
who are visiting the DietHobby channel.  I've noticed some new registrations here at DietHobby.com, this past week, and I think they might be people that I've directed here for more info and support re dieting and weight-loss.

Life goes on....as I'm always writing here. We have to be committed to our food plan and follow through even in the busy, stressful times in order to be successful with weight-loss and maintenance of that weight-loss. That's what I'm working very hard to do as well.

Today I'm rather lacking in inspiration, except for sharing my own life's details.  However, there are many very inspirational and informative articles in the Archives.
Take the time to read some. 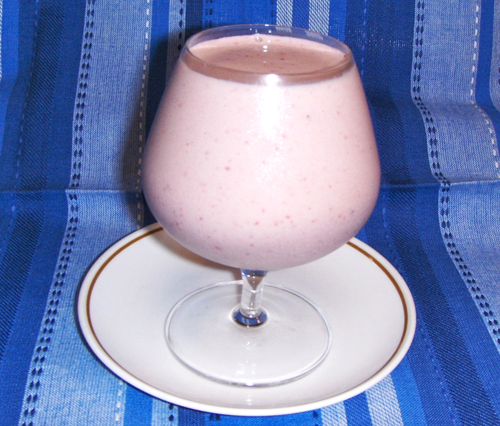 Recently I posted another cooking video, Strawberry Banana Smoothie,
which is located at DietHobby, under RECIPES, Sweet Tastes.

This is a low-calorie, recipe, and eliminating the banana will make it also low-carb.