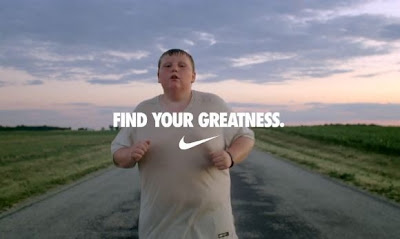 In general, today’s society seems to think that Running, or Athleticism is a positive goal for everyone. This opinion tends to support its prejudice against obesity in general. Sometimes I am amazed at the depth of such prejudice, along with the overwhelming acceptance of the biased misinformation that accompanies it.

Many obese people are quite healthy, and they live active, functional, and fulfilling lives. An Obese person is not necessarily an Unhealthy person, and being obese is not a direct cause of either disease or ill-health.

Even though there are many studies that have found that any correlation between being Obese and being Unhealthy is merely an ASSOCIATION, many people, including those in the medical profession, wrongly believe that the mere state of being Obese is Unhealthy and that being Obese is the CAUSE of disease. Nowadays, there are even people who say it obesity causes diseases which no one has discovered either the cause or the cure… such as Cancer and Alzheimers.

I am in agreement with this recent article by Dr. David Katz which is quoted below:

I have now been interviewed several times about those Nike "find your greatness" ads we all saw during the Olympics,… in particular, about the ad that shows an obese boy running down a dirt road.

Personally, I think Nike may have meant well, but went down the wrong road.

We may reasonably commend Nike for good intentions. Of course, an athletic-ware company implying that we can all find greatness, but should do so along a course through some kind of athletic activity -- for which they, presumably, stand prepared to provide wardrobe and accessories -- may not be the purest form of altruism we've ever seen. Still, let's give Nike the benefit of that doubt, and say thank you for the concept.

For the execution, not so much.

The ad in question, suggesting that this obese boy is pursuing greatness as he runs down the road -- is presumably intended to remedy obesity bias. But it seems to me it may be propagating it. Obesity is not a barrier to greatness of many varieties. But it certainly is a barrier to great distance running.

I am concerned that the ad suggests that something for which obesity is a genuine barrier -- athletic prowess -- is what greatness is all about. This, of course, is near-sighted nonsense. I don't know for sure, but I bet Sir Isaac Newton did a truly lousy butterfly. I can't see Mother Teresa in the synchronized swim. And I bet Mozart wasn't much of a hurdler.

The boy in the ad, Nathan, made running look every bit as wretched as David Rudisha and Mo Farah made it look inspiring. If we pretend we saw greatness, or even the potential for it, in this ad, we may be buying into Nike's version of the Emperor's New Clothes.

The message that obesity is no barrier to greatness is both a good and important message. But did this poor boy running, looking like he was about to pass out or throw up (as, apparently, he actually did during filming) -- look like greatness to you? It looked like torture to me.

Even as we are trying to escape our cultural biases, they are in fact asserting themselves. Why does greatness need to be about running, or even athleticism? Why show that obesity is NOT a barrier to greatness, by picking a form of greatness to which obesity is clearly and objectively a barrier? As my friend and colleague Steve Blair points out routinely, fitness and fatness can of course go together. But severe obesity, as in this case, and distance running clearly do not.

In fact, as a physician, I would advise this young man AGAINST running until after he had lost considerable weight by lower-impact means, far less hazardous to his joints, connective tissues, and even cardiovascular system. The running this boy was doing looked not only horribly unpleasant, but also potentially dangerous, and ill-advised.

There are innumerable alternative roads to greatness. Perhaps this boy is a great writer, a great humanitarian. Perhaps he is the kindest person you could ever meet. Perhaps he is an orator, a singer, a musician, a composer, a poet, a painter, a chess master. There are countless ways this boy might be great -- and obesity would not be a barrier to any of them.

The ad could have shown a boy we were inclined to judge based on his appearance sitting down at a piano bench -- and stunning us with his virtuosity. That would have rocked our bias back on its heels and shown us, without muddling the message, that obesity and greatness can travel the same road.

If Nike wants to promote physical activity, per se, that's fine -- but that's not about greatness. Then the message is: Anyone can be active, and everyone can benefit from it (a message with which I agree wholeheartedly). Start small, do what you can do, and build from there. The message is that anyone can get to better health, and everyone deserves to do so. But health is not "greatness." And implying that doing anything at even a nominal level is "greatness" demeans what most of us want the term "greatness" to mean.

Such a double standard propagates, rather than redresses, obesity bias by failing to look past Nathan's weight to all of the ways in which he might be truly great. Weight does not measure human worth. It is not an indicator of character. Bathroom scales are not designed to weigh merit. The boy in the Nike ad may well be full to the brim with greatness -- but none of it has anything to do with running.

Obesity is not a barrier to greatness. It is not a barometer of worth. But it does tend to impede running down a road, and often, achieving greatness in athletics per se. Pretending otherwise is about denying our biases, not fixing them.

I had an active, fulfilling, and healthy life when I was morbidly obese, and I have one now at normal weight. I like being normal weight, and I hated being fat, but this is primarily due to my own vanity. I love looking at myself in the mirror now, but (truthfully) I was fairly fond of doing that before...Now I just look at my whole body, instead of merely isolated parts of me.

My goal ... NOT to be obese .... was one that I set for myself in childhood, no doubt due to the social influences around  me. I'm very happy to have accomplished it, and I'm willing to continue expending a great deal of effort to sustain that goal.

I didn't lose weight to be "healthy".  My life experiences have caused me to internalize society's bias toward non-obesity, which means that I see myself as more attractive at normal weight.

For whatever reason, it's important to me personally, but everyone doesn't have to share the same goals. The main reason that I’ve always worked so hard to avoid obesity, and to be a normal weight, is because … in general… society treats me better at normal weight. Because I no longer look obese, ...... strangers, acquaintances, and the people who don’t love me, tend to give me far more positive …rather than negative…attention.

The people who love me are happy to see me be a normal weight. But, when I was fat, the people who love me treated me just as well as they do now. That is something that lets me know that they love me. I believe that people who truly love me will accept my appearance as I am, whether fat or thin, whether young or old..

I believe that one of the reasons I still have a healthy body here in my late 60s is because I did not abuse it with excessive exercise during the years when I was obese. I feel sad when I see those television “reality” shows that encourage fat people to engage in physical activities that are clearly inappropriate for their morbidly obese bodies. People who abuse their bodies with excess food don’t need to also abuse them with excess exercise. It's just two abuses. One abuse doesn't cancel out the other.