Thin for the Holidays? 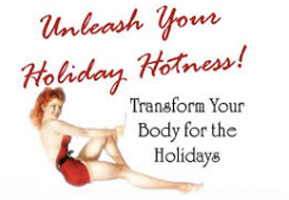 We’ve all seen those advertisements from companies trying to make money by telling us that 'the holidays’ are coming, and we are somehow too fat for them. .. Like:

"the holidays are just around the corner,
will you have a body you can be proud of?”

which is, of course, an attempt to make us feel insecure and then profit by playing on those insecurities.

I agree with Ragen Chastain, of danceswithfat, who says:

“..now I'm supposed to worry that I'll embarrass myself just by existing in a body that hasn't been manipulated to some size I can be "proud of" which, based on the picture that accompanied the message, would require me to lose about 150 pounds and grow 6 inches in the next two months.

If they were honest their ad copy would have read "The holidays are coming so it would be great if you would hate your body and make a desperate bid to change it that won't work but will make us a boatload of money so that our last quarter numbers look good."

We may not be able to stop the diet companies from trying to ruin the next three months ...(and the month after that with their New Year's Resolution, and the months after that with whatever they try to use to create a giant chasm between us and loving ourselves)... but we can decide that they aren't going to succeed.

I recommend a secret little mantra that I've created that I say whenever I see diet industry ads.  My mantra is "HEY, THAT'S BULLSHIT!"  Works like a charm to remind me not to buy into any of this.

Quoted from “Too Fat for the Holidays”, by Regan Chastain, at danceswithfat.