About Self-Control and the Marshmallow test 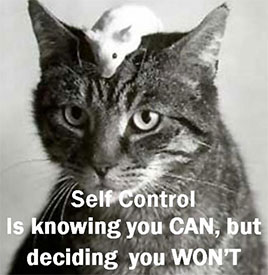 Most people who have spent time learning about the issue of self-control are familiar with the famous “Marshmallow Test” study, a legendary experiment on self-control which was invented about 50 years ago.

The article below is an interview with 84 year old, Walter Mischel, the original "Marshmallow Man"  in which he shares his thoughts and tells us about his soon-to-be-published first non-academic book,  The Marshmallow Test: Mastering Self-Control.

Learning How to Exert Self-Control
by Pamela Druckerman,
posted in New York Times, 9/12/14

Not many Ivy League professors are associated with a type of candy. But Walter Mischel, a professor of psychology at Columbia, doesn’t mind being one of them.

“I’m the marshmallow man,” he says, with a modest shrug.

I’m with Mr. Mischel (pronounced me-SHELL) in his tiny home office in Paris, where he spends the summer with his girlfriend. We’re watching grainy video footage of preschoolers taking the “marshmallow test,” the legendary experiment on self-control that he invented nearly 50 years ago. In the video, a succession of 5-year-olds sit at a table with cookies on it (the kids could pick their own treats). If they resist eating anything for 15 minutes, they get two cookies; otherwise they just get one.

I’ve given a version of the test to my own kids; many of my friends have given it to theirs. Who wouldn’t? Famously, preschoolers who waited longest for the marshmallow went on to have higher SAT scores than the ones who couldn’t wait. In later years they were thinner, earned more advanced degrees, used less cocaine, and coped better with stress. As these first marshmallow kids now enter their 50s, Mr. Mischel and colleagues are investigating whether the good delayers are richer, too.

At age 84, Mr. Mischel is about to publish his first nonacademic book, “The Marshmallow Test: Mastering Self-Control.” He says we anxious parents timing our kids in front of treats are missing a key finding of willpower research: Whether you eat the marshmallow at age 5 isn’t your destiny. Self-control can be taught. Grown-ups can use it to tackle the burning issues of modern middle-class life: how to go to bed earlier, not check email obsessively, stop yelling at our children and spouses, and eat less bread. Poor kids need self-control skills if they’re going to catch up at school.

Mr. Mischel — who is spry, bald and compact — faced his own childhood trials of willpower. He was born to well-off Jewish intellectuals in Vienna. But Germany annexed Austria when he was 8, and he “moved quickly from sitting in the front row in my schoolroom, to the back row, to standing in the back, to no more school.” He watched as his father, a businessman who spoke Esperanto and liked to read in cafes, was dragged from bed and forced to march outside in his pajamas.

His family escaped to Brooklyn, but his parents never regained their former social status. They opened a struggling five-and-dime, and as a teenager Walter got a hernia from carrying stacks of sleeves at a garment factory. One solace was visiting his grandmother, who hummed Yiddish songs and talked about sitzfleisch: the importance of continuing to work, regardless of the obstacles (today we call this “grit”).

Mr. Mischel came both to embody sitzfleisch, and to study it. Over a 55-year academic career he has published an average of one journal article, chapter or scholarly book about every three months. Over the years, some of the original subjects in the marshmallow study have begged to know whether they ate the marshmallow as preschoolers; they can’t remember. He has told only one of them, who had cancer at 40, and asked to know his marshmallow results on his deathbed. (He was a “pretty good” delayer, Mr. Mischel says diplomatically.)

Part of what adults need to learn about self-control is in those videos of 5-year-olds. The children who succeed turn their backs on the cookie, push it away, pretend it’s something nonedible like a piece of wood, or invent a song. Instead of staring down the cookie, they transform it into something with less of a throbbing pull on them.

Adults can use similar methods of distraction and distancing, he says. Don’t eye the basket of bread; just take it off the table. In moments of emotional distress, imagine that you’re viewing yourself from outside, or consider what someone else would do in your place. When a waiter offers chocolate mousse, imagine that a cockroach has just crawled across it.

“If you change how you think about it, its impact on what you feel and do changes,” Mr. Mischel writes.

He explains that there are two warring parts of the brain: a hot part demanding immediate gratification (the limbic system), and a cool, goal-oriented part (the prefrontal cortex). The secret of self-control, he says, is to train the prefrontal cortex to kick in first.

To do this, use specific if-then plans, like “If it’s before noon, I won’t check email” or “If I feel angry, I will count backward from 10.” Done repeatedly, this buys a few seconds to at least consider your options. The point isn’t to be robotic and never eat chocolate mousse again. It’s to summon self-control when you want it, and be able to carry out long-term plans.

“We don’t need to be victims of our emotions,” Mr. Mischel says. “We have a prefrontal cortex that allows us to evaluate whether or not we like the emotions that are running us.” This is harder for children exposed to chronic stress, because their limbic systems go into overdrive. But crucially, if their environment changes, their self-control abilities can improve, he says.

Self-control alone doesn’t guarantee success. People also need a “burning goal” that gives them a reason to activate these skills, he says. His students all have the sitzfleisch to get into graduate school, but the best ones also have a burning question they want to answer in their work, sometimes stemming from their own lives. (One student’s burning question was why some people don’t recover from heartbreak.) Mr. Mischel’s burning goal from childhood was to “make a life that would help my family recover from the trauma of suddenly becoming homeless refugees.” More recently, it’s been to find coping skills for children suffering from traumas of their own.

At the moment, my burning goal is to be like Walter Mischel. At 84, instead of slowing down, he’s preparing for his American book tour and fielding questions from Polish journalists.

His secret seems to come straight from the marshmallow test: distraction. “It’s to keep living in a way one wants to live and work; to distract constructively; to distract in ways that are in themselves satisfying; to do things that are intrinsically gratifying,” he says. “Melancholy is not one of my emotions. Quite seriously, I don’t do melancholy. It’s a miserable way to be.

Here’s a short video about the Marshmallow Test study.