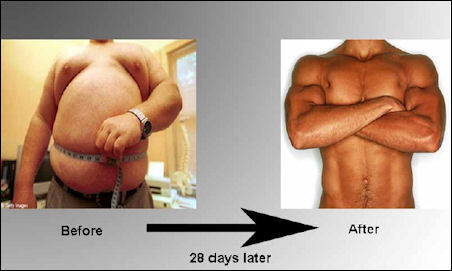 We live in a world of Unrealistic Expectations.

Fat Is Officially Incurable (According to Science)
By: David Wong

Let's get this straight: The number of people who go from fat to thin, and stay there, statistically rounds down to zero.

Oh, you can lose a ton of weight. You'll gain it back.
Here's one study running the numbers.
Here's a much larger analysis of every long-term weight loss study they could find.
They all find the exact same thing: You can lose and keep off some minor amount, 10 or 15 pounds, for the rest of your life -- it's hard, but it can be done. Rarer cases may keep off a little more. But no one goes from actually fat to actually thin and stays thin permanently.

And when I say "no one," I mean those cases are so obscenely rare that they don't even appear on the chart. They can't even find enough such people to include in the studies. It's like trying to study people who have survived falling out of planes. Being fat is effectively incurable, every study shows it, and no one will admit it.

So the guy or girl you see in the "Before" and "After" photos in weight loss commercials, who completely changed body type with diet and exercise? You know, like Jared from Subway, who lost 230 pounds? Either they're about to be fat again in a couple of years, or they're a medical freak occurrence, like the sick guy who was told he had six months to live but miraculously survives 20 years. That guy exists, we all know famous examples. But it's a rare, freak situation, living in defiance of all of the physical processes at work.

How rare? Well, this person did the math and as far as they could tell, two out of 1,000 Weight Watchers customers actually maintain large weight losses permanently. Two out of a thousand. That means if you are fat, you are 25 times more likely to survive getting shot in the head than to stop being fat.

Meanwhile, here's an article where scientists marvel at the amazing success of Weight Watchers, because a study of their most successful customers showed they permanently lost 5 percent of their weight. Wow! You come in at 300 pounds, you stay at 285!   Next stop, thong store!

So please remember this the next time the subject comes up at the office or on some message board and you get bombarded by thin 20-year-olds insisting the obese need to just "cut out the junk food" or "take care of themselves" or "do some exercise." The body physically won't allow that for a formerly fat person.

"Well, just stop eating so much!" Sure, kid. To feel what it's like, try this:

Go, say, just 72 hours without eating anything. See how long it is until the starvation mechanism kicks in and the brain starts hammering you with food urges with such machine gun frequency that it is basically impossible to resist. That's what life is like for a formerly fat person all the time. Their starvation switch is permanently on. And they're not going 72 hours, they're trying to go the rest of their lives. It's like being an addict where the withdrawal symptoms last for decades. Here’s a breakdown of the science in plain English.

As that article explains, the person who is at 175 pounds after a huge weight loss now has a completely different physical makeup from the person who is naturally 175 -- exercise benefits them less, calories are more readily stored as fat, the impulse to eat occurs far, far more often. The formerly fat person can exercise ten times the willpower of the never-fat guy, and still wind up fat again. The impulses are simply more frequent, and stronger, and the physical consequences of giving in are more severe. The people who successfully do it are the ones who become psychologically obsessive about it, like that weird guy who built an Eiffel Tower out of toothpicks.

Statistically, the only option with any success rate is a horrible, horrible surgical procedure. I can find no data whatsoever that says otherwise. Keep all of this in mind the next time you see a Jenny Craig or Bowflex commercial.