Why Do Dieters Regain Their Lost Weight?

Yesterday I posted a scientific research article about biological adaptations that promote weight regain in obese humans, with a link to a less technical article explaining the same issue.

The article below addresses that issue from a “Health at Every Size” position.

I agree with the article, and I admire the positions of “Health at Every Size” and “Size Acceptance”.   I spent many years of my life working to diet while living with morbid obesity.  I’ve experienced having the Fat Bias of others directed against me, and I didn’t like it.  Those cultural experiences were unpleasant enough to cause me … even now at 70 years of age … to continually struggle to keep my body in a state of starvation so that it will consume itself and be smaller than it wishes to be. 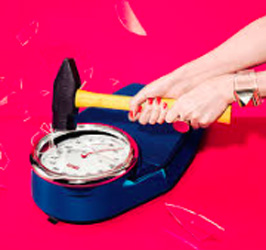 At this point, I’ve chosen NOT to personally adopt an “Intuitive Eating” non-diet lifestyle for myself.

I don’t plan to allow my body to ever tell me what to eat because, if there’s any way to avoid it,  I don’t want my body to become enormously fat again.  There’s a good chance that keeping up my constant struggle to eat a very tiny amount will - at least - reduce the speed of my weight regain.

I’m old now, so I figure that my life won’t be long enough for the what-now-appears-to-be-an-inevitable-weight-creep-upward to return me all the way back into morbid obesity.

Would I make the choice to continue the struggle if I were now in my 30’s or 40’s or even my 50’s?  If I knew, — that even though I continued to vigilantly and consistently work to successfully eat only 500 to 800 calories every day, — that eventually, my body would still wind up extremely fat again?  Probably not.

Why Do Dieters Gain Their Weight Back?
by Regan Chastain, of www. danceswithfat. org

…I think that one of the persistent myths that allows the diet industry to increase their profits every year with a product that doesn’t work is the idea that  “well, people gain the weight back because they just go back to their old habits!” (Of course in this case “their old habits” means not putting their body into a state of starvation so that it will consume itself and become smaller, but we’ll get to that in a minute.)

The thing about intentional weight loss is that research shows that almost everyone can lose weight short term, but then almost everyone gains it back – with the majority of people gaining back more than they lost. Weight loss companies make money by taking credit for the first part and blaming the client for the second part. When I was in school they taught us that if most of the kids failed the test, then the problem was probably the teacher and not the students.  So if only a tiny fraction of people are able to maintain weight loss, is it really believable that the product works but almost everybody is just too weak-willed to do it? Or is it more likely that the product doesn’t work and the very few people who are able to be “successful” are held up (wrongly) as proof of efficacy rather than (correctly) as exceptions? Consider this:

Your body doesn’t understand that there is a certain size and shape that brings with it an increased social capital.  Your body can’t imagine a situation in which it is hungry and there is food, but you won’t feed it. And so when your body is hungry but you ignore it, it assumes that there is no food available. Your body is like “No problem, I’ve evolved to survive famine let me just get those systems online. I’ll just get started lowering our metabolism.”

In the meantime, you go run on a treadmill. Your body now thinks that there is a famine and you have to run from bears. But your body is like “No problem, I’ve got this.” So it lowers your metabolism even more, drops calorically expensive “extra” muscle, floods the body with hunger hormones (since, what with the famine and the running from bears, it wants to make sure that you don’t forget to eat) and it holds back hormones that tell you that you are full. Basically, your body is hard at work doing everything it can to lower the amount of food that you need to live and store as much food as it can.

Of course people are allowed to try to intentionally manipulate their body size if they want, but I think people deserve to know that the most likely outcome of intentional weight loss is weight gain, and not necessarily for the reasons we’ve been told. “Just don’t go back to your old habits!” seems like something we can control.  “Just change your body biologically back to how it was before you dieted!” not so much.

If we are looking to increase our odds for health (knowing that health is not an obligation, a barometer of worthiness, entirely within our control, or guaranteed under any circumstances) there is no evidence to suggest that intentional weight loss will help with that, and there are evidence-based ways to support our health that don’t involve self-created famine or bear attack scenarios.  We each get to make choices but it would be nice if we weren’t bombarded with so much bad “information” along the way.