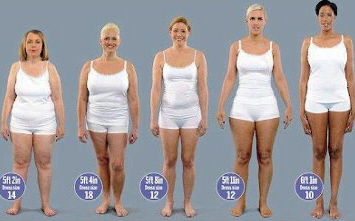 This is how different
150 lbs can look.

During my years of sharing my online, I've received many comments from women with heights in the 5' 4" to 5' 9' range giving me their opinions about my weight-maintenance stuggles. The substance of those comments have indicated to me that many women simply do not understand, or do not think about, the basic concept of the picture above.

Additionally, ... in general ... as a woman ages, she burns less and less calories, and many short, elderly woman require very few calories to maintain a "normal" weight.
Food Label information is based on a mythical “AVERAGE” daily requirementfor intake of 2000 calories. Nutritionists also provide that number along with the 1200 calorie number that no one is supposed to go under. Most people consider themselves about average (or better than average) so when they think of daily calorie requirements these are the numbers they normally think about. But these numbers are very wrong for many people.

More knowledgeable people will use online calculators to determine their basic metabolism rate, and then add the activity factor percentage that they believe applies to them, in order to get an estimate of their own personal daily calorie requirement.

These general truths are also complicated by the fact that the BMR /RMR charts showing calorie requirements for various ages, heights and weights are made up of many different variables that are AVERAGED all together. The calorie requirements given for any specific woman within these charts can often be 10% less than stated.

There can be differences in BMR even when two people have exactly the same lean body mass. Within the studies on which the chart numbers are based, the top 5% of people are using energy 28-32% faster than the bottom 5%.

All equations for predicting energy expenditure are only estimates, however, the Harris-Benedict equation typically overestimates by 5% or more.

Also, although Harris-Benedict is called BMR, it is ACTUALLY an equation for RMR, not BMR because the test subjects did not spend the night at the testing facility.

The following chart might be shocking to people who think in the general terms that Nutritionists give about the number of calories required to maintain a normal body weight.

I prepared the chart shown here using my own age and height.
This chart shows estimates of my calorie requirements at different weights.
It compares the Mifflin RMR with the Harris-Benedict BMR. 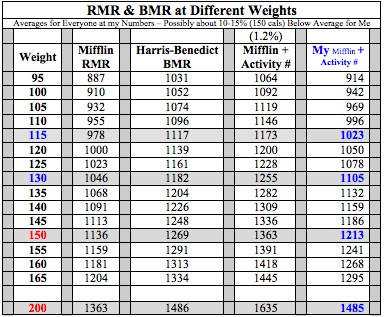 For an estimate of my TOTAL calorie burn based on the chart averages,
see the column which has my sedentary Activity factor (1.2%) added to my Mifflin RMR.

Since my consistent record keeping indicates that my total calorie burn is below average, I also made a comparison of low-average numbers existing within the standard deviation.
This last column most closely matches my numbers in the computer daily calorie records which I’ve kept for the past 8 years.

The calculations most closly matching my records show that eating an average of 1200 calories per day would maintain my body at around 150 lbs.

Even my own initial reaction was:  "THAT CAN"T BE RIGHT!" ... but yes, I'm afraid that it is correct.
 Notice that EVEN using the total Formula for an "Average" woman of my height and age means eating a 1635 daily average would maintain her at 200 pounds.  To visualize how 200 lbs looks on my 5' 0" body ... add 50 more pounds to the shortest woman on the top picture, and then make her fatter to adjust for making her 2 inches shorter.