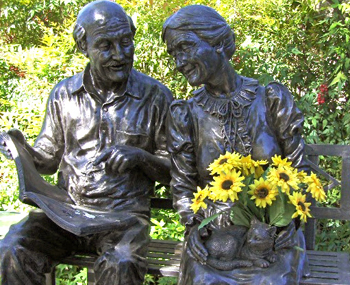 I started DietHobby in February 2011,
so it has now been in existence for 1 year.

Today, I'm taking a step back from the day-to-day involvement,
to look at the big picture, re-assess my progress, and perhaps
make adjustments to the project.

I began the DietHobby website as an extension of my
diet forum involvement in order to provide a place of my own
that was under my own management and control,
to store my Thoughts about dieting and related subjects,
as it applies to my own Maintenance Progress.

I purchased my own Domain, DietHobby.com.
My web-genius-son wrote the code for this DietHobby website.
He brought it into existence and taught me how to use it.

People can easily learn about me and my dieting history
by reading the About Me page.

I've written frequent articles and stored them in the Archives
for easy accessibility for anyone interested.

I've made many recipe videos and put them in the Recipe section
to easily share them with others.

I've included some personal pictures in the Gallery section,
for those who would like to see my family or my stained glass projects.

I've completed a thorough summary of a best selling diet-book
and placed it in the BookTalk section.

I've organized and provided links to helpful sites,
and relevant videos in the Resources section,
including a Playlist of my Words of Wisdom video series
which is intended to be used as a positive motivational tool.

DietHobby's companion channel on YouTube
began as a place to store the Recipe videos,
and the 30 second Inspirational videos
that I made for this website.

However, YouTube also has a community of its own
who view videos, make comments,
and subscribe to be notified of future videos.

This YouTube community includes all ages, from children through the elderly.
These are people of different tastes, interests, cultural backgrounds, education,
nationality, religion, race, sex, and political affiliations.

Although the YouTube DietHobby's primary viewers are in the United States,
there are also DietHobby viewers in Canada, United Kingdom, Australia, Germany,
the Netherlands, India, Singapore, Saudi Arabia, Mexico, Brazil, Thailand,
Turkey, Kazakhstan, and the Philippines, as well as other countries.

My web-genius-son suggested that I begin a third video series,
to better address the many needs and interests of the YouTube Community.
This video series is entitled "Ask Grandma", which answers questions from viewers.

I learned to prepare, set up, shoot, and edit all of my own videos,
and how to upload them into YouTube.

During this past year, I've also continued to engage myself
in my Hobby of Dieting, to connect with other dieters who have similar interests ,
and I have managed to maintain my weight-loss for yet another year.

My primary DietHobby plan is to continue writing
and participating here at this DietHobby website,
and I hope that people with similar dieting interests will
come here and participate with me.

For the present,
I intend to continue my DietHobby involvement with YouTube.
and try to be helpful to the community there, while trying to attract
those adults who are interested in dieting and maintenance to
this DietHobby website.

YouTube is simply a massive website of it's own,
with millions, probably billions, of viewers from all over the world.
It is owned by Google, who is now in the process of
incorporating it into the "Google family".
This is bringing a great many drastic changes to the YouTube website,
including the way it is set up, designed, and managed.
Right now, navigating through the New YouTube
is proving to be sort of a "crap shoot" for video "creators"
such as myself.

This is because YouTube…since being taken over by Google..
has many vague and poorly defined rules, and policies
that are sometimes shared, and sometimes kept private.
YouTube can pick and choose if and how they enforce these,
and any channel can disappear from the site without cause or notice.

YouTube is now moving toward a corporate goal
of becoming more like television…whatever that might mean to them….
and people who have video channels there…even those with
hundreds of thousands of subscribers, and millions of views…
are far less important or valuable to the owners of the YouTube website
than they were in the past years from its creation in 2006 to the present.

YouTube's new plans could benefit DietHobby,
or it could make the youtube website useless to DietHobby.
Either way, the process is interesting, and I am actually
very much looking forward to seeing how this develops over time.

So…. this is what I've been doing this past year.
I'm hoping that this next year will be just as interesting.
But I also hope that DietHobby will take a lot less of my time,
and will be a whole lot less work.