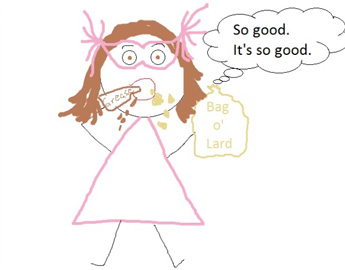 No one in life gets away
with avoiding all problems.


Defining a problem helps me understand it,
which helps give me
wisdom to know the difference
between what I can change,
and what cannot be changed.

What is a Binge?

The dictionary definition of bingeing is:

Bingeing isn’t usually because of lack of self control and weakness.  We binge because of a complex interaction of habit, brain chemistry, and external cues that signal us to eat. This interaction can be overcome, but it's harder to do and takes longer to change than most of us realize.

Current scientific research indicates that bingeing has a physical (PHYSIOLOGICAL) cause, and that mental & emotional (PSYCHOLOGICAL) problems are a RESULT of the condition, not the CAUSE of the condition.

Neuroscientists say that Bingeing is a normal response to Dieting because:

Metabolic suppression is one of several powerful tools that the brain uses to keep the body within a certain weight range, called the set point. The range, which varies from person to person, is determined by genes and life experience. When dieters’ weight drops below it, they not only burn fewer calories but also produce more hunger-inducing hormones and find eating more rewarding.

The brain’s weight-regulation system considers your set point to be the correct weight for you, whether or not your doctor agrees. If someone starts at 120 pounds and drops to 80, her brain rightfully declares a starvation state of emergency, using every method available to get that weight back up to normal. The same thing happens to someone who starts at 300 pounds and diets down to 200. 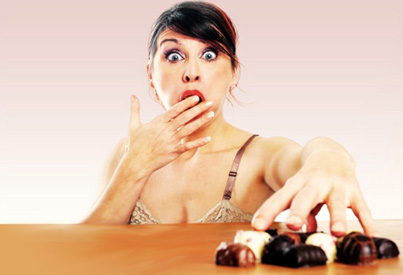 Our brains send signals to the rest of our body that it is starving when our weight is below its Set Point range.  A person’s Set Point is determined by a person’s genes and life experience.

Life experience involves a person’s weight history, because when a person gains and holds “excess” weight, their Set Point can rachet up, and up and up.  (A rachet is a mechanical device consisting of a toothed wheel or rack engaged with a pawl that permits it to move in only one direction.)

However,  thus far all of the evidence shows that this is a one-way-street survival issue. While Set Points can go up with weight-gain,  they don’t go back down with weight-loss.

Many body functions are naturally one-way as we grow, age, and experience life.  When our life experience changes our Set Point, it’s like our scars, stretch marks, wrinkles, grey hair etc. in that there is no “natural” way our bodies will revert back to the way they once were.

Weight-loss and maintenance have less to do with motivation and will-power than most people think. In fact it has far more to do with how the individual body adjusts to, and is capable of, resisting a calorie deficit. Putting less fuel in the tank of one's car will always cause the car to drive a shorter distance.  However, the human body adapts to less fuel .... meaning eating fewer calories .... by becoming more ‘efficient’ and running the same distance on less fuel than before. That is the big difference between simple physics and biology. 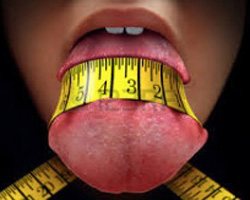 Is Dieting a form of STARVATION?

The dictionary definition of STARVATION is defined as “to suffer or die from lack of food”.

To “SUFFER” is defined as “to experience something unpleasant”.  Although we might not be in any danger of dying from lack of food, most Dieting does involve “suffering… from lack of food”.  Therefore, the term “starvation” isn’t completely inaccurate, but, of course, there are a great many different degrees of suffering.

However, most Diet Guru’s, including medical doctors, say that a Dieter is not experiencing “starvation” as long as there is any excess fat left on that person’s body. Excess fat defined as: there is “less than an inch of fat to pinch”, and the body weight is near the bottom border of its 18 BMI “underweight” category.

This is true for some people, but not ALL people.  Although all human bodies operate in a similar fashion,  there are differences in the ways that they function. The regulatory mechanisms which allow our cells to deal effectively with fluctuations in nutrient supply can vary from person to person, and there is a still a great deal that science has not yet discovered about the body’s inner workings.

Research studies involving lab rodents have demonstrated genetic differences. Certain genetically obese mice will fatten excessively regardless of how little or how much they eat. Some of them, … while dieting, … will consumed their own muscles and organs and die before all of their “excess” fat is gone.

Researcher Jean Mayer reported: “These mice will make fat out of their food under the most unlikely circumstances, even when half starved”.  If starved sufficiently, these animals can be reduced to the same weight as lean mice, but they’ll still be fatter.  They will consume the protein in their muscles and organs rather than surrender the fat in their fat cells.

When these fat mice are starved, they do not become lean mice…, they become emaciated versions of fat mice. 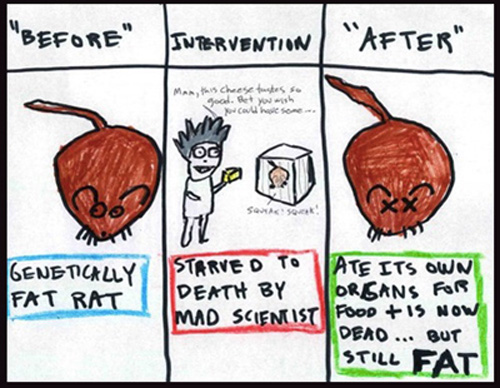 In 1936 Francis Benedict reported this after fasting a strain of obese mice.  They lost 60 percent of their body fat before they died of starvation, but when they died, they still had five times as much body fat as lean mice that were allowed to eat as much as they desired.

In 1981, M.R.C. Greenwood reported that restricting the diet of an obese strain of rats known as Zucker rats from birth onward, caused those rats to grow fatter by adulthood than their littermates who were allowed to eat to their heart’s content.  These semi-starved Zucker rats had 50% less muscle mass than genetically lean rats, and 30% less muscle mass than the Zucker rats that ate as much as they wanted.  The calorie restricted rats were sacrificing their muscles and organs to make fat.


If Bingeing is a natural response to Starvation,
why is it considered to be an Eating Disorder?

In the 1960s the medical profession began attributing psychological reasons, rather than physiological reasons to people who overeat to the point of obesity. 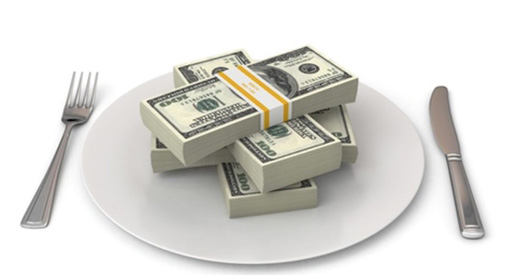 Since that time, there has been a tendency on the part of health professionals to classify every kind of eating outside “moderate eating” as an “eating disorder”.

Eating Disorder Not Otherwise Specified (EDNOS) includes a wide variety of disordered eating patterns. It's often used for people who meet many of the symptoms of anorexia or bulimia but not all. For example, a woman who meets all of the symptoms for anorexia, but still menstruates regularly -- a criteria for an anorexia diagnosis -- would be diagnosed with an “eating disorder not otherwise specified”.

Binge eating disorder (B.E.D.) first appeared in the American Psychiatric Association's Diagnostic and Statistical Manual of Mental Disorders, or DSM, in 1994. Until recent times, “Binge Eating Disorder” was categorized under the umbrella term 'eating disorders not otherwise specified”, or EDNOS for short.  However, in 2013 it was added to the DSM-V as B.E.D., a specified eating disorder.

There are many reasons for this…and one of them is Financial Motivation. Unless a behavior is labeled a “disorder” or an illness, health insurance won’t pay for treatment.

You may call me cynical, but since “Binge Eating Disorder” is far more common than anorexia and bulimia, it has a much larger population base. This means MORE PATIENTS to treat with Therapy, and/or Eating Disorder programs;  MORE MONEY and more profit for that specific health industry field.

Health professionals admit that a Binge Eating Disorder is more than simply eating too much food, and that many obese patients don't have it.  However these medical “experts” still they claim that up to 5 percent of obese patients and 30 percent of patients participating in weight loss programs meet the criteria for binge eating disorder.

In May 2013 the DSM-V, added Binge Eating Disorder to its list of specified eating disorders.  All of the following must be met to meet the diagnostic criteria of B.E.D.

1.  Recurrent and persistent episodes of binge eating
2.  Binge eating episodes are associated with three (or more) of the following:

3.   Marked distress regarding binge eating
4.    Absence of regular compensatory behaviors (such as purging). 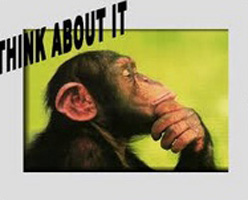 Such a diagnosis would fit almost every fat person that I’ve even known.  I’ve been super fat myself, and I’ve known many, many others.  Almost every fat person … and some of those who are not fat … experiences eating occasions where they sense that they have lost control of their eating behavior, AND have strong feelings of embarrassment and guilt after eating an unusually large amount of food when they aren’t physically hungry.

Weekends come every week, vacations and holidays come frequently, other celebrations and special events happen frequently as well.  Plus, most of us experience times of sadness, anxiety, or crisis more frequently than we like.

It is common for almost any person, whether fat or thin,  to engage in excess overeating on these occasions. It is also a very common occurrence for a fat person to “binge out” at least one time a week for months at a time.

The disgust and aversion that modern Society has for fat people pretty much guarantees that fat people will feel embarrassment and guilt because they’ve “failed” to keep from engaging in behavior that contributes to their fat condition.

It is my opinion that, despite the “conditions” that psychologists attach to the “Binge Eating Disorder”, by their proposed definition, almost everyone who engages in excessive or uncontrolled indulgence in food, which is the dictionary definition of Bingeing, could easily fall into the current medical classification of having an “eating disorder”.

I find something really wrong with this reasoning.

For those who are obese, (and normal-weight-dieting-people) bingeing is normal, and not abnormal, eating behavior.

My own experience together with my observation of the dismal long-term success rate  of “eating disorder” treatments, … especially those that include the use of “Intuitive Eating” as a tool of recovery …  supports my belief that while Therapy is helpful to gain self-understanding of one’s behaviors, and can help one learn alternative behaviors, the underlying conditions causing obesity are not cured through that process.

I see Society’s current label of “Eating Disorder”, and suggested “Treatment”, as simply another attempt to shame fat people into believing that they should eat “normally” and that their body should be a “normal” weight.  It’s one more indoctrination to misinform fat people. It's another way to reinforce the Cultural Lie that only those who are greedy, lazy, or mentally ill are fat, and that if anyone would just “eat healthy” instead of "overeating" or "dieting", they would meet our Culture’s standards of what is a “healthy”, or a  “normal”, or even a “thin” weight.

This is a misplaced effort, because an obese body wants to maintain itself.  It doesn’t want to maintain itself as a Thin body.  It wants to stay Obese.  Bingeing is a natural physiological response to our Culture’s demand that fat people become thin. It is based upon a survival instinct that will never disappear, no matter how thin one becomes, or how much therapy one has.