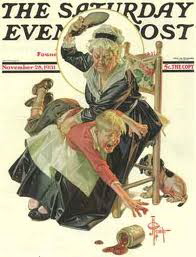 This picture shows a parent in the act of physically disciplining a child, and one’s individual emotional reaction to this behavior will depend, in part, on one’s own cultural bias.

What is meant by the term: “Cultural Bias”?

BIAS is a preconception that prevents objective consideration of an issue or situation.

CULTURE is a rough label for a set of characteristics (beliefs, practices, and values) that a group of people tend to have in common. There are also cultures within cultures. For example, the American Culture is a subgroup of the Western Culture, and there are many cultural subgroups within the American Culture.

Cultural values, attitudes and behaviors prominently influence how a given group of people view, understand, process, communicate, and manage data, information, and knowledge.

CULTURE been defined as a kind of collective programming of the mind that distinguishes the members of one group from another. In essence, the content of culture consists of a set of underlying norms and values of behavior, shared by a group of people who are tied together by powerful affiliations or bonds.

Cultural differences can be understood as CULTURAL BIAS, a bias so deeply ingrained that it is unconscious, unless explicitly examined.

The term CULTURAL BIAS is defined as interpreting and judging things in terms particular to one's own culture, which includes attitudes, behaviors, beliefs, and social practices.

Cultural bias occurs when people of one culture make assumptions, because they interpret and judge things by their own cultural standards.

Cultural Bias means that a culture’s views are in fact different from, and in conflict with, another culture’s views. Cultural bias involves a prejudice in viewpoint because of a preference of one’s own culture over another. Difference does not imply unfairness. It would be stupid to deny that all people are subject to cultural bias.

Cultural bias is simply the tendency to interpret and judge things by standards inherent in one's own culture. We all do it to some extent. It's a given.

Ethnocentrism is a the belief that ones own cultural group is superior. That one’s own cultural beliefs etc. are normal and that others are abnormal.

Ethnocentrism leads us to make false assumptions about cultural differences.

We are ethnocentric when we use our cultural norms to make generalizations about other people’s cultures and customs. Such generalizations ─ often made without a conscious awareness that we've used our culture as a universal yardstick ─ can be very inaccurate and cause us to misjudge other people’s culture and customs. Ethnocentrism also distorts communication between human beings.

We often (incorrectly) assume that other cultural groups share our view of what is ‘normal’, e.g. in terms of accepted methods in areas such as those of conflict resolution, child discipline, dating behaviors, eating behaviors, manners, including table manners, and age-appropriate activities.

One large example of cultural bias is that mainstream Western culture values individualism and sees the individual as the basic unit. However, many other cultural groups operate on a more communal paradigm and hence family expectations and family loyalties may override individual needs. Similarly, mainstream Western culture assumes that independence is desirable and that dependence is undesirable; hence psychological “experts” may even tend to view family life in some cultural groups as being ‘enmeshed and pathological’.

Here in the United States, the issue of cultural bias often goes unrecognized and unacknowledged. People in positions of power, such as

Judges, Educators, Psychologists, Healthcare Professionals, Politicians, Law Enforcement, and the Media  often belong to cultural subgroups which have very different values than the cultural subgroups over which their power is exercised. They tend to push their own values on those subgroups, forcing others to follow the rules of behavior that they set forth. Frequently this happens with the best of intentions, similar to the way Western Missionaries brought “Civilization” to the “Savages”, which included requiring the native women to wear more clothing.

Cultural bias exists everywhere.
It is  something that a person needs to be aware of, and to watch for,

when one is interested in trying to be as objective as possible,