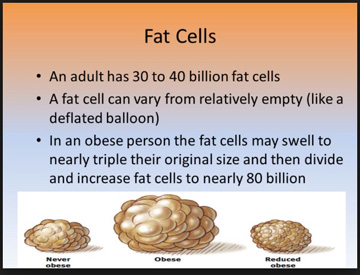 Once fat cells reach a certain size -- that is, they become filled to capacity with fat content -- then new fat cells will begin to form.  The fat cell number and size increases and shrinks based on deposits from food intake.
“We have a seemingly infinite capacity to recruit new fat cells, but we cannot get rid of them once they have been recruited" said Michael Rosenbaum, associate professor of clinical pediatrics and medicine at Columbia University. "in most cases, weight gain initially reflects ... enlargement of existing fat cells followed by an increased growth of new fat cells.”

Research has shown that obese people who have weight loss surgery have just as many fat cells two years after the surgery as before it, even though they have become much thinner.

Scientist, Dr. Rudy Leibel, says that "the body controls the number of its fat cells as carefully as it controls the amount of its fat". Fat cells die and new ones are born throughout life. Scientists have found that fat cells live for only about seven years and that every time a fat cell dies, another is formed to take its place.

Below see a 2017 New York Times article about this matter. 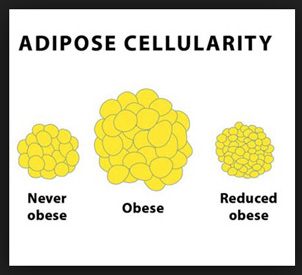 Once fat cells are formed, can you ever get rid of them?

The number of fat cells in a person’s body seems to be able to change in only one direction: up. Fat cell number increases through childhood and adolescence and generally stabilizes in adulthood.

But this doesn’t mean that fat cells, or adipocytes, are stagnant. The size of individual fat cells is remarkably variable, expanding and contracting with weight gain or weight loss. And as with most cell types in the body, adipocytes die eventually.

“when old ones die, they are replaced by new fat cells,” said Dr. Michael Jensen, an endocrinologist and obesity researcher at the Mayo Clinic. Cell death and production appear to be tightly coupled, so although about 10 percent of adipocytes die each year, they’re replaced at the same rate.

Even among bariatric surgery patients, who can lose massive amounts of weight, the number of fat cells tends to remain the same, although the cells shrink in size, studies show.

Liposuction reduces the number of fat cells in a person’s body, but studies show the weight lost is typically regained within a year. It isn’t known whether this regain occurs through the production of new fat cells or expansion of existing ones.

People who are obese tend to have more fat cells than those who are not, and several studies have found an increase in fat cell number with weight regain following weight loss.

"The fact that fat cell number can be increased but not decreased most likely contributes to the body’s drive to regain weight after weight loss", said Dr. Kirsty L. Spalding, a cell biologist at the Karolinska Institute in Sweden and the lead author of a 2008 study showing that fat cells die and are replaced. Beyond their role in storing fat, adipocytes secrete proteins and hormones that affect energy metabolism.

“Following weight loss, adipocytes become smaller, generally smaller than those from people with a similar B.M.I.,” Dr. Spalding said. One hypothesis is that those smaller cells might send signals to increase appetite and fat storage, which could help to explain why weight loss is so difficult to maintain, though much more research is needed. 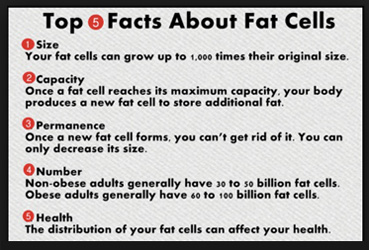