What Size Are You REALLY? 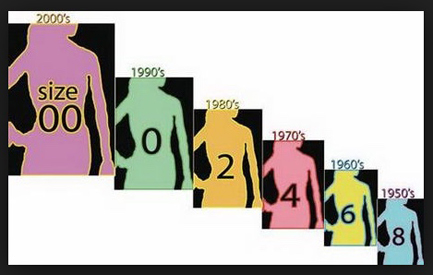 What Size are You, REALLY?

I’ve been a female wearing clothing all of the years of my life.

I was born in 1944, and it is now 2017, and during those many years, my body has fit into many different sizes of clothing.  Sometimes this was because I was fatter or thinner, and sometimes it was because of the extreme size variations involved in manufactured clothing.

I’ve spent the past 60 years dieting, and hanging around other dieters, and am very familiar with how women use the size of an article of clothing to track their weight progress.  Frequently, I've heard women about 5’4” tall, age around 50, weighing about 185 pounds say:  “This is the first time I’ve been in a size 10 pants for years.”

Using clothing to track weight-loss is a very subjective method. It concentrates on how we feel.  This method relies heavily on our opinions of ourselves.  Our opinion of how we look often changes from day to day, regardless of how much weight we have lost or gained. A shirt that we love one day may seem either too long or loose … or … too short or tight on another day.

Another problem is that sizes are often different depending on the store.  What is a size 0 in one place may be an 8 in another. The article below gives some fascinating details about this.


The Absurdity of Women’s Clothing Sizes
by Christopher Ingraham, Aug 11, 2015, The Washington Post.

Here are some numbers that illustrate the insanity of women's clothing sizes: A size 8 dress today is nearly the equivalent of a size 16 dress in 1958. And a size 8 dress of 1958 doesn't even have a modern-day equivalent — the waist and bust measurements of today’s era size 8 come in smaller than today's size 00. 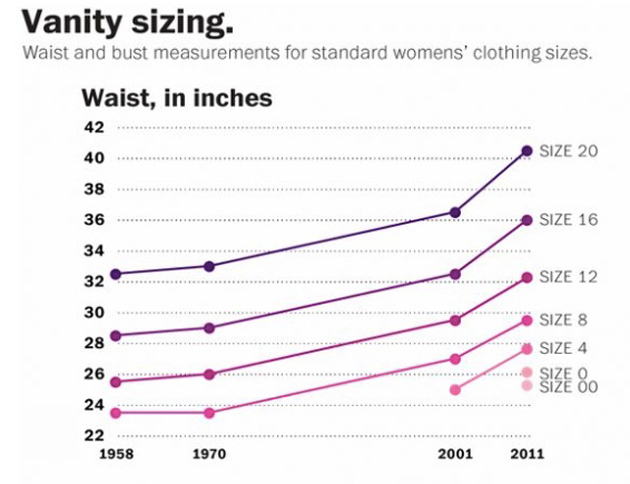 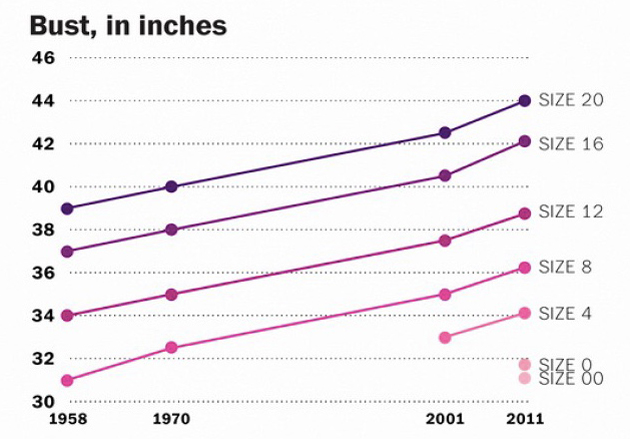 These measurements come from official sizing standards once maintained by the National Bureau of Standards.

Centers for Disease Control and Prevention data show that the average American woman today weighs about as much as the average 1960s man. And while the weight story is pretty straightforward — Americans got heavier — the story behind the dress sizes is a little more complicated, as any woman who's ever shopped for clothes could probably tell you.

Today's women's clothing sizes have their roots in a depression-era government project to define the "Average American Woman" by sending a pair of statisticians to survey and measure nearly 15,000 women. They "hoped to determine whether any proportional relationships existed among measurements that could be broadly applied to create a simple, standardized system of sizing."

They failed. Not surprisingly, women's bodies defied standardization. The project did yield one lasting contribution to women's clothing: The statisticians were the first to propose the notion of arbitrary numerical sizes that weren't based on any specific measurement — similar to shoe sizes.

The government didn't return to the project until the late 1950s, when the National Bureau of Standards published "Body Measurements for the Sizing of Women's Patterns and Apparel" in 1958. The standard was based on the 15,000 women interviewed previously, with the addition of a group of women who had been in the Army during World War II.

The document's purpose? "To provide the consumer with a means of identifying her body type and size from the wide range of body types covered, and enable her to be fitted properly by the same size regardless of price, type of apparel, or manufacturer of the garment." 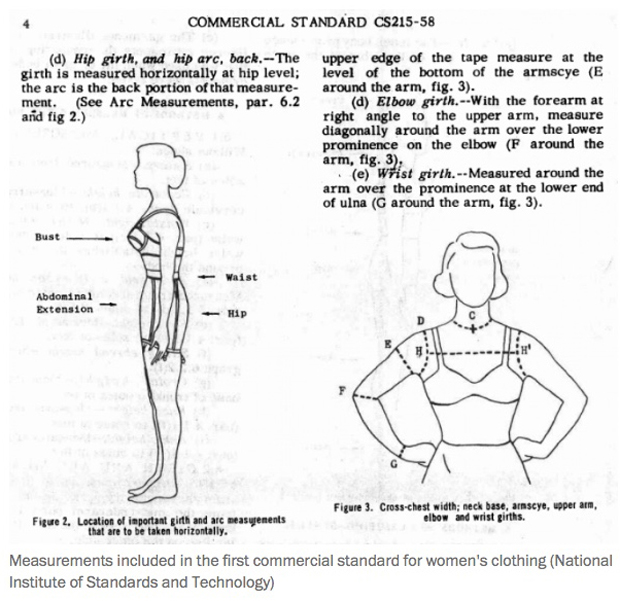 The standard included the first modern women's clothing size charts,
and it provides the first data points in the charts above.
Women's sizes ranged from 8 to 42.
A size 8 woman had a bust of 31 inches,
a 23.5 inch waist,
and a weight of 98 pounds.

The government updated these standards again in 1970. But already, manufacturers were getting restless because it was apparent that the "representative" women measured for the standard weren't representative at all. Non-white women were excluded. The group of women from the Army were almost certainly fitter than the average American woman. By 1983, the government ditched the standard completely. Manufacturers were left to define sizes as they saw fit.

Enter the era of vanity sizing. Clothing manufacturers realized that they could flatter consumers by revising sizes downward. The measurements that added up to a size 12 in 1958 would get redefined to a size 6 by 2011. And different manufacturers defined sizes differently, too. In 2011, a size 8 waist measurement could differ by as much as five inches of cloth between different designers.

The American Society of Testing and Materials, a nongovernmental international standards organization, began trying to restandardize women's sizes in the 1990s. But if you've dealt with the frustration of buying or trying on women's clothes recently — particularly if you're short, tall, or in any way idiosyncratically shaped — you know that most manufacturers ignore these standards.

So women are left to navigate the chaos of arbitrary sizing on their own. So much for enabling women "to be fitted properly by the same size regardless of price, type of apparel, or manufacturer of the garment," as the government's 1958 standard loftily envisioned. 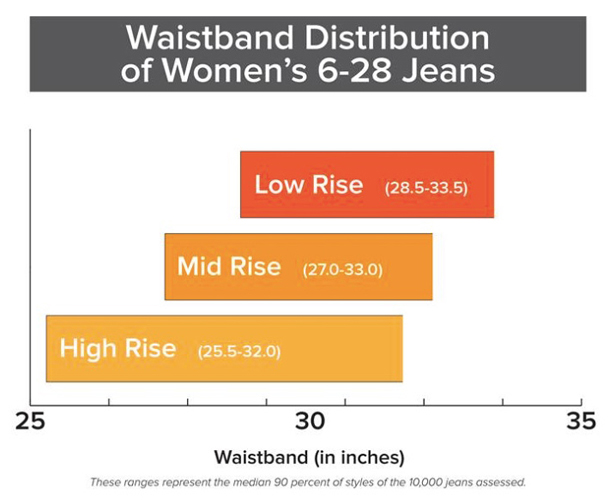