Shooting the Messenger Does Not Solve the Problem. 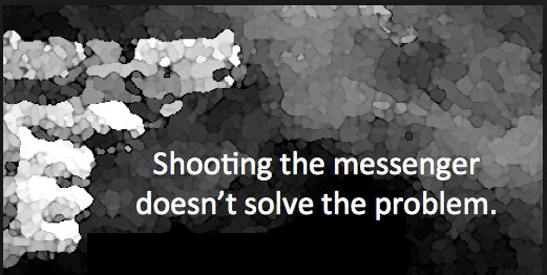 The Scale
is not
your enemy.

A lack of awareness and general ignorance of the ongoing amounts of our caloric intake, and of our resulting scale weight can sometimes bring temporary “peace of mind and self-acceptance”. 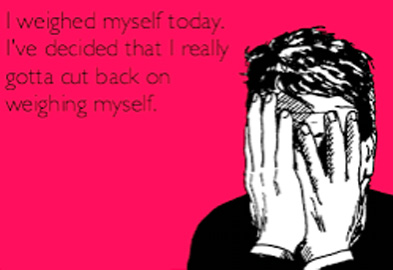 Many of us would like to be able to believe the commonly held Fantasy that a person (even if severely obese, or reduced-obese) can trust the urges and needs of their body to guide them in their eating choices.

The problem with this Myth is that the body will guide us where it wants to go.  There is clear and convincing evidence, from scientific research, and from experiential dieting results,  that an obese body wants to stay fat, and a reduced-obese body wants all of its lost fat returned as soon as possible.

It requires consistently following SOME METHOD of conscious eating Behavior that restricts calories to an amount which is the same-or-less as the amount used by that individual body. ....Together with a consistent and precise METHOD of measuring the ongoing weight Results of that eating Behavior.

How do you figure out how much you weigh? Be careful not to fall into the trap of weighing yourself weekly, because it’s just not enough data for you to know what’s really happening. Weigh yourself every morning, but ignore the number that comes up on the scales. Instead take the average of the last seven days (preferably ten or fourteen), and after several weeks look at how that average is changing over time. That’s where the real truth lies. 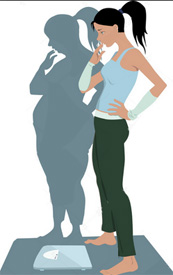 "Although we must be vigilant of possible negative side effects of frequent self-weighing on restrained eaters and people who might be vulnerable to eating disorders, the data, so far, does not present a cogent argument for daily self-weighing as a serious risk."

"A critical review of the literature suggests that daily self-weighing, with or without personalized messaging, may be an effective tool to help individuals counter the subtle effects of the many food-related stimuli in our obesogenic environment that seduce us to eat a little bit more, causing us to gain a little more weight." 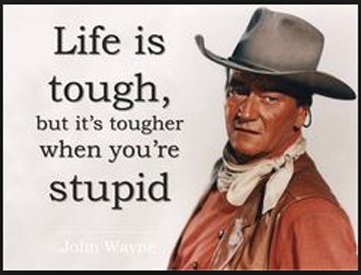 New advice for weight loss:
Get on the scale every day
….paraphrased portions of
a 2016 article by Kim Painter.

The bathroom scale is not your enemy.

In fact, if you want to lose weight or prevent new pounds from packing on, the latest research suggests the scale could be one of your best friends.

"The old conventional wisdom was: 'Don't weigh yourself more than once a week. It will drive you crazy,' " says Dori Steinberg, an obesity prevention and treatment researcher at the Duke Global Health Institute in Durham, N.C. "But now we are seeing more and more research showing that the optimal frequency for weighing oneself is likely every day."

That's right: every day —  contrary to the popular theory that such frequent trips to the scale could be confusing, discouraging or even psychologically dangerous.

"Stepping on the scales should be like brushing your teeth," says David Levitsky, a professor of nutrition and psychology at Cornell University.

Levitsky and Steinberg are among researchers who put daily weighing to the test after preliminary studies linked it with weight loss and maintenance. Those preliminary studies, based on observations of people in broader studies, did not prove that frequent weighing helped people control their weight. It was possible that cause and effect went the other way —  that good numbers kept people coming back to their scales while disappointing numbers kept them away.

But newer studies have directly tested daily scale use. Among the findings:

"We found no negative outcomes," says Steinberg, who led that study.  However, sometimes people have begged off the studies after learning they will have to face a scale every day,  "Some people say they just can't stand it." 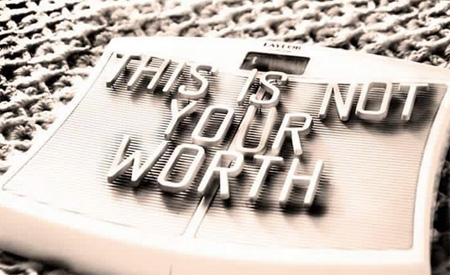 There are people who allow themselves to get lost in the numbers and start indentifying their self-worth with what's on the scale.

A scale weight number is an objective fact that is true whether one chooses to be consciously aware of it or not.

It is also important to understand that weight fluctuates day to day, hour to hour, depending not just on what you have eaten but how recently you have had a bowel movement or a drink of water.

Proponents of daily weighing say it can be a powerful tool.

"If you see your weight going up a little bit, you may consciously or even unconsciously be more resistant to all the cues in the environment that might otherwise make you eat a little more," Levitsky says.

Steinberg says frequent weighers can start to see patterns and act on them. "If you go out to a buffet dinner, you could be up 4 pounds the next day," she says — and choose to consume fewer calories that day. "Or if you change a behavior like snacking at night, you might see your weight drop three days in a row" and decide to keep that change.

Weigh yourself each morning, and "it's a nice kick-start to the day,"  a reminder to keep up what's working or change what's not.

Weigh at the same time of the day, in the same state of undress, each day. Most experts recommend early morning, as that is when people tend to weigh the least. 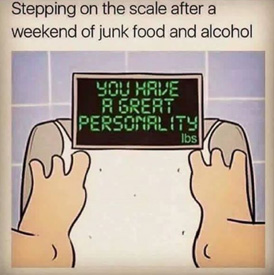 A scale weight number is an objective fact that is true whether one chooses to be consciously aware of it or not.

Appearance, and clothing sizes are SUBJECTIVE ways to measure one's weight-loss, weight-gain, or maintenance, while scale weight is OBJECTIVE.

An objective perspective is one that is not influenced by emotions, opinions, or personal feelings - it is a perspective based in fact, in things quantifiable and measurable.

A subjective perspective is one open to interpretation based on one's personal feelings, emotions, and momentary aesthetic judgments.

Refusing to consciously acknowledge or accept an objective fact is commonly known as "Denial":  a psychological defense mechanism in which confrontation with reality is avoided by denying the existence of that reality.

The scale is merely a tool that tells me the number of pounds that I weigh at the moment I’m standing on it.  It does NOT make value judgments.  It is an inanimate object, a machine with a function, just like a refrigerator or microwave; a washer or dryer; a clock or a vacuum cleaner.

If I choose to go into my kitchen outside of mealtime, open the refrigerator, take out a food item and eat it, I’m not stupid enough to blame the refrigerator.  Yet somehow it has become common for people in our culture to surround the scale with superstitions.  To give it life and assign it personal motivations, even though we KNOW it is totally lifeless, insentient, and inorganic.

It’s Like choosing to avoid the refrigerator ….
...........“NO!… Don’t put that leftover chicken in the refrigerator, when you reopen the door a chicken zombie will attack you and peck your eyes out.”

If you heard someone say THAT you’d think they were wacko, yet, how many times have we said … or heard others say …  things about the scale are are just as totally off-base. 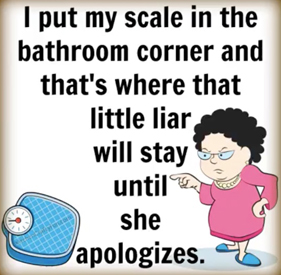