The Difference Between Causation and Correlation 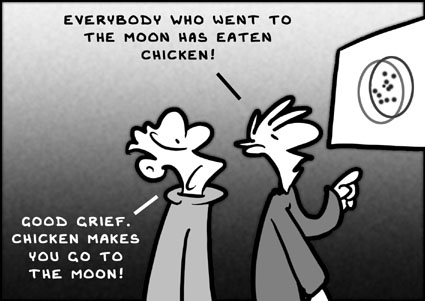 One of the most common errors in the press is the confusion between correlation and causation in scientific and health-related studies.

But just because two things occur together does not mean that one caused the other, even if it seems to make sense.

In general, we should all be wary of our own bias. We like explanations. The media often concludes a causal relationship among correlated observances when causality was not even considered by a research study itself. Without clear and definite reasons to accept that one thing CAUSES another, the fact that a correlation exists is all we should accept. Again, two events occurring in close proximity does not imply that one caused the other, even if it seems to makes perfect sense.

Once upon a time, this type of error wasn’t too bad.
If one ate a berry and got sick, it was wise to see meaning in that data. (Better safe than sorry). The same goes for a red-hot coal. Only one touch will give all the correlations needed. Being bullied by a primitive world of nature, it's far worse to miss a link than it is to make one up. A false negative yields the greatest risk.

Now conditions are reversed.
People in modern civilization are bullies over nature. New claims about causation are often made so we can make large interventions in nature. A false positive today often means approving drugs that have no effect, or imposing regulations that make no difference, or wasting money in schemes to limit unemployment. Now, as science grows more powerful and government more technocratic, the stakes of correlation…. of making counterfeit relationships and bogus findings,… grow larger and larger. A false positive is now more burdensome than it's ever been. The only thing we have to fight this attitude is the catchphrase. “correlation is not causation”.

Mistaking correlation for causation finds a cause that simply isn't there.