Dark Chocolate Is Not Good For You And Also Sucks 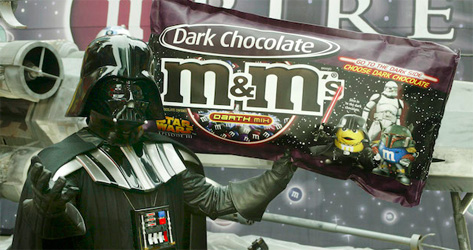 I enjoyed, and agree with, many of the sentiments expressed in this entertaining article.

Dark Chocolate Is Not Good for You, and Also Sucks.
by James Fell

For about a decade, the sales of dark chocolate have soared, regardless of the fact that it tastes like someone melted down a bunch of brown crayons, mixed it with charcoal and then let it solidify into bar form. Why the boost? As a senior VP from Hershey said in 2006 of the 37% spike in sales of their Special Dark, “There are underlying benefits with the consumption of cocoa that give consumers the permission to enjoy chocolate.”

When I was a kid treats were rare. Cinnamon toast was considered decadent. I remember raiding the cupboards for something sweet and finding dark chocolate and thinking jackpot! But my sister said, “Don’t bother. It says ‘chocolate,’ but it’s really not.”

But a while back someone came up with an idea to market health claims around dark chocolate to drive sales, and now we have scantily-clad, coconut-water drinking Crossfit junkies “treating” themselves with one or two squares of paleo-approved dark chocolate after they do their dehydrated and well-lit butt-thrusted Instagram selfies, because of antioxidants, or something. And how many cheesy health websites have written listicles about “7 Ways that Dark Chocolate Shrink Tumors/Alleviates Adrenal Fatigue/Eases PMS/Cures Ebola”? Too many. It’s almost as annoying as kale or quinoa.

“Oh, your dark chocolate only has 70% cacao? You poor thing. I only eat 97% cacao fair trade raw vegan organic helper monkey picked chocolate that’s been through the digestive system of a spotted African cat.”

These people exist. They love to obsess over their meager ration of dark chocolate and feel all holier than Hershey-eating thou because it’s a “healthy” treat, even though it tastes like a bag of smashed badger asses and the heaps of sugar and fat somehow don’t get factored into the health-washing. It’s not too guilty a pleasure because it’s dark. Pair it with a glass of red wine for the resveratrol and you’re bulletproof.

If you genuinely like dark chocolate, fine. Move along.

But if you’re buying into the health-washing while rationing nibbles as your reward for sticking to a soul-destroying diet, just stop. Eat a mostly healthy diet, and then when you feel like eating chocolate, eat the shit out of it. None of this “I’ll just have a square of dark chocolate now and then” bullshit. Get some fucking Turtles, or a Caramilk bar, or a Crispy Crunch, or one of those triangle shaped Toblerone things. Get a Jersey Milk and dip that sucker in the Skippy peanut butter and say, “Mmmm … G-M-Oh-my-God-that-tastes-good.” Eat your favorite chocolate, the good kind, made with tons of sugar and cream and LIVE, DAMNIT!

Pretending to like dark chocolate when you really don’t–and even worse, using it as a tool to further your orthorexia–is not living. Just like refusing to eat anything but Kerrygold unsalted grass-fed butter, it’s being elitist and having a bad relationship with food.

Moderation is not a bad word. There are no bad foods, there are just bad diets. There is nothing that should be on a banned list of foods, barring allergies or if you have some kind of runaway cravings where you really can’t stop once you’ve started on a certain thing. There was this chocolate-covered caramel-coated popcorn my wife bought from the Boy Scouts once, and I have never lost control with a treat so badly in my life. I told my wife that shit was off limits from now until I had a terminal disease, and she agreed.

(Note: If there are a number of foods that cause you to lose all control you may wish to speak with your doctor or a mental health professional.)

Focus on eating mostly healthy foods, with some worthy indulgences, and don’t be a jerk about chocolate by getting all snobby over it. Just eat the treats you want most, and don’t pretend that just because it’s dark, or claims to have antioxidants, that it’s some kind of super food.

After all, there are no super foods.

James Fell is an internationally syndicated fitness columnist for the Chicago Tribune. He interviews celebrities about their fitness stories for the Los Angeles Times and contributes to Men's Health and AskMen.com.
He blogs at Body For Wife. com